The girls and I decided to head out again yesterday afternoon. We were going to go to a specialty book store to have the magazines I purchased formally appraised but it the store was no longer in business or had moved. We decided to stop by Goodwill instead. We ended up in a different area of town so I ventured over to the art store I have been wanting to visit, Jerry's Artorama - a discount art store chain that is actually based here in Raleigh.

In the book section I found the "Wonder Book for Boys and Girls", written by Nathaniel Hawthorne and illustrated by Palmer Cox. The book included a a preface by Lenox, dated July 15th, 1851 but no other dates or information on when the book was published. Other than that the book had 5 things that were very interesting about this purchase: 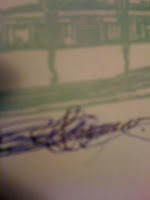 1. The book looked very old but ironically had a name almost identical to my daughter's written in and then haphazardly scribbled over (swap two letters and the name is the same). It was a little eerie to be quite honest! Upon a closer look the last name maybe 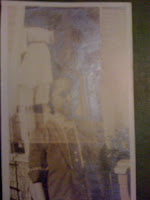 2. Flipping through the book, I found a photo of two women with the date "1851" written on the back. The date was written in ballpoint pen so I realized that this was dated many years after the photo was taken. (Ballpoint pen was invented in the 1930's). The quality of the original picture is not great and the image taken via my iPhone even less so. I hope to properly scan this and see if I can enhance the image.

I don't know if the former owner guessed the date to be 1851 based off of the date of the preface in the book OR if it was a family photo that was known to be on or around 1851. I do believe the photo WAS taken in 1851 however because it was of two women wearing prairie attire - I googled other images from that time frame and the dress style was very similar. 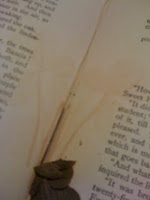 3. Flipping further through the book I found a four leaf clover between pages 180 and 181. The clover remained intact until I was trying to take a picture of it and our puppy walked right over the book and the clover. The clover turned to "dust" so to speak but you can see an aged imprint of it between the pages. 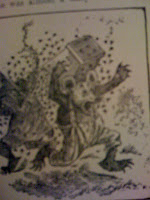 5. The preface itself was very odd. Usually these are quite complimentary to the author. I cannot say that this is the case here. My take on the preface is that the Lenox (Not certain, but I am thinking that is must be James Lenox) was not overly fond of Hawethorne's Wonder Book, insinuating that the stories were not original, instead updated versions of age old tales.

Miss C. is asking when we can go back to Good Will again LOL. Maybe I will. I love old items - I wonder about the history of the item and the person or people who were the former owners. Who were they? What were their lives like, etc. Add to my resume professional shopper, art historian, literary expert, bibliophile, antique appraiser and handwriting deciphering technician.