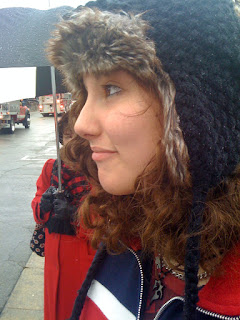 Today we went to the Wake Forest parade. To be honest I was dreading it. Usually anytime we go to any large event my DH drives. He is much better than I am at arriving where we are supposed to, finding good parking and getting us out of there quickly. I am not. He had to work so I was the designated driver. 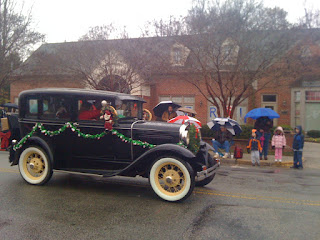 The girls were supposed to get dropped off at the back of the post office. We ended up walking and found everyone in the front. By then we were about 15 minutes late, but hey - we found it. I was happy. I only had to go around the block twice. That is pretty good considering I had no idea where we were going and everything was starting to get blocked off. 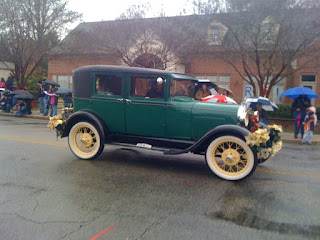 Miss C. and I dropped the little girls off and headed out back towards the main street of historic Wake Forest. I took her out to a Tea House for Scones and Tea. I love the tea house - I am a tea drinker and love the charming and quaint ambiance and enjoy the scones with Miss E. and Miss N. loved the Tea House when I took them a few months earlier. Miss C. did not. Apparently tea is not her thing. Our stay was brief - no more than 20 minutes.

We went to The Cotton Company for a little shopping. The shops are darling - they have a wide variety of items. I picked up some soy votive candles and some last minute gifts. We then headed out to find a spot at the side of the road. 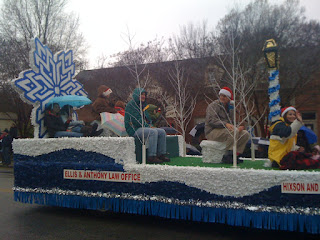 It was cold and rainy outside. I was glad that we were able to stay warm during our wait but it was at the expense of getting a good seat. The positive was that we WERE at the very front section of the parade with street side seating (except that we were actually standing). The negative was that there while were several buildings with awnings, these areas were already full with early birds. We did not have an umbrella so basically we got rained on. I was just thankful that Miss C. and I both had gloves and hats. 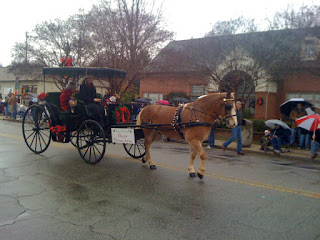 The girls were one of the earlier groups to come out. A few groups were in front, including ROTC, Boy Scouts, friends of the Wake Forest Library - including the bookmobile, 2 other girl scout troops, a dance troupe, the United Methodist Church, etc.

My girls are in sister troops which is very convenient - their meetings are the same date, time and place and most of the activities are as well. As such both groups of girls were walking together - Miss E. with her Brownie troop and Miss N. with her Junior troop. As soon as the girls passed, Miss C. and I ran over to the other side where the parade ended. 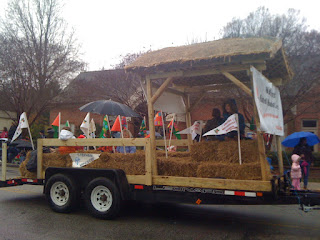 Shortly after the girls walked by again. I quickly grabbed them and ran to the car. We were cold, wet and miserable. I have to give credit to all the kids in the parade - they really hung in there!

Unfortunately I parked in a bad spot - we could not get out as there were still groups entering the parade one one side and there were groups departing the parade on the other. We were smack dab in the middle. All we could do was wait until we could finally leave. I blasted the heat and took pictures of myself with my camera phone (I need a new profile pic). The girls ate candy canes, took off their shoes and socks and argued. Miss C. texted on her phone.

Finally the parade ended and we were able to head home. When we arrived home is when the real celebration again! Next year I will be a little more prepared.