If you are not familiar with this story please take five minutes and read. This should scare the hell out of any parent, especially as this is NOT an isolated incident. This can happen to ANYONE. 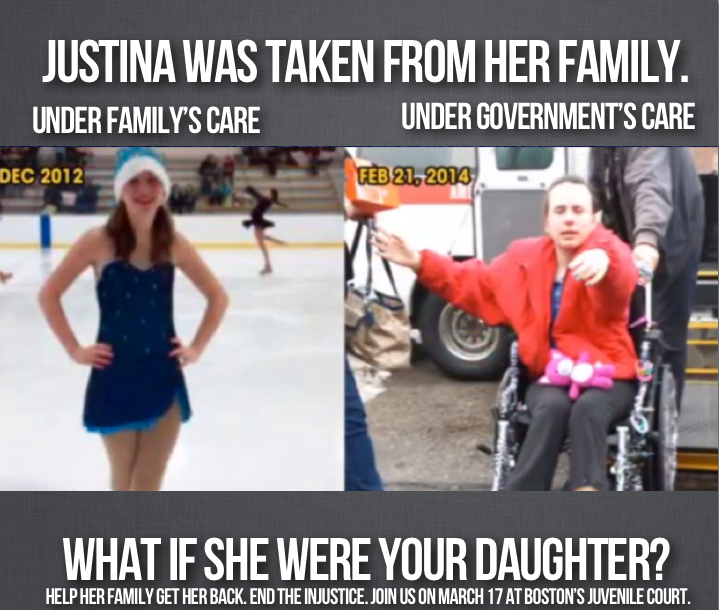 Photo credit from A-Miracle-for-Justina FB page
In summary Justina is a teen who was diagnosed by doctors at Tufts with a rare Mito syndrome.  This is especially difficult to diagnose but her sister has a similar diagnosis so it appears to be hereditary.  Tufts is a highly respected institution and the doctors that diagnosed her were experts in the field.

After diagnosis, Justina was taken by her parents to another hospital, Boston Children's, for a completely unrelated issue - complications from a cold or virus. While under their treatment, the team at Boston Children's disagreed with the other diagnosis saying that the symptoms were psychological, not physical and accused the parents of "medical abuse". Keep in mind that none of the doctors at Boston's who examined Justina are experts in Mito disorders and a proper psychiatric exam was never fully conducted.

Long story short, Boston Children's called in MA DCF and gained custody over the girl so they could keep Justina under their care.  Their "care" reportedly involved stopping all medical treatment for the Mito issue so during this time (several months) the girl, Justina, has not been getting the treatment that she needs. The parents have had limited visitation and Justina has literally been wasting away over the last few months.  If she does not receive the proper care it is very likely that she can die.  The before and after pictures of how she looked right before admittance to Boston Children's and how she looks now are alarming.

In a final custody battle, the state of Massachusetts "permanently" stripped the parents of custody, not based on the medical facts, but based on the fact that the father had been extremely vocal during this process. The judge claimed that he was "verbally abusive") to DCF staff, drawing attention to the incompetence of DCF and Boston Children's. This has NOTHING to do with the medical reasons of the case or their ability to parent their children.

One concession and positive outcome of the new ruling is that is that she will finally go back to Tufts to receive medical care but as a ward of the state, not under her parent's custody.  In an even bigger powerplay, the parents are being denied any type of visitation which is unprecedented for this type of situation. This has completely torn the family apart.  This entire situation shows an abuse of power by both DCF and Boston Children's.  This includes a misinterpretation and deliberate abuse of laws which have been put in place to protect children.  A disagreement over a medical diagnosis between medical professionals should never result in this sort of outcome

This has received wide media attention.  The thought that this can happen today in a democratic society is terrorizing. Even worse is that there are children who are truly being abused. The time that DCF has spent on this case could have been spent where it is really needed. Think of all the cases where children were hospitalized or died and it comes out that social services was involved but missed a visit or did not probe deep enough into a case because of huge caseloads and a shortage of staff.  Here are parents who are obviously loving and caring yet being denied access to their child.

Other Americans are completely disgusted and distressed that this can happen in this day and time.  Some people are even threatening DCF and Boston Children's.  I do not agree with threats of physical harm but it is imperative that people bring attention to this matter until the situation is resolved.   That includes signing petitions, writing letters, placing calls, etc.  Many people are calling for individuals to boycott the state, including the upcoming Boston Marathon, which brings in a huge amount of money.

Justina belongs back at home with her parents.  Ask yourself if we do not do anything, who or what is next?   More importantly ask yourself how you would feel if this was your child.   Here is how you can help:

Official Website:  http://www.FreeJustina.com
Follow on Facebook for updates from the family:  A Miracle for Justina  This site includes a list of websites and numbers posted by users that people can visit and call to protest