school today and quiet around here

Normally it drives my crazy when the girls are running around and screaming. I am constantly using phrases like "tone it down", "no running in the house", "go play in the sunroom" and in desperation "Be Quiet!.

I had every intention of not sending the girls to school today on principle. Yes, it is ridiculous that school is OPEN on Memorial Day but Miss E. and Miss C. have missed too much this year because of colds, the flu and nasty ear infections. It would not be fair to keep Miss N. (who rarely gets sick) home, so off to school they went.

They will be home in 3 - 4 hours and for better or for worse the house will liven up again!

I am a movie buff. During the winter I primarily watch TV. In the summer I read, watch movies and do crafts with the girls. The last truly "great" movies I remember seeing were "Pride and Prejudice", "The Last King of Scotland" and "Atonement".

On Saturday the girls rented "Hotel for Dogs". I won't comment much on that movie as it was a typical corny, fun kids movie. My girls loved it though and watched it twice. My husband and I later watched "Wanted" a thriller with Angelina Jolie, Morgan Freeman and James McAvoy (who I love from Atonement), which for a thriller actually had an interesting plot.

I love dramas, and WWII dramas in particular. Last night after the girls went to bed I rented "The Boy in the Striped Pajamas". The film is centered around a German boy who idolizes his father, a high ranking Nazi officer. The boy's father is promoted and newly stationed at at a concentration camp. The boy and his family move to new home that looks more like a business office than a home.

At first the boy is homesick and dislikes his new living quarters. Through his window he notices a "farm" with strange farmers wearing striped pajamas. His mother is appalled he can see the "farm" and is very firm that he is only to play in the front of the home, not the back, which is locked and gated.

Where his sister and father take what they are being told on faith and pride in the Nazi party, the boy and his mother question what they is being told against what they are observing. This is ironically aligned to the relationship the family has with the maternal grandparents - the grandfather who openly supports the Nazi movement and his grandmother who, not quietly enough, does not.

The boy finally escapes to the woods behind the house and develops a friendship across a barbed wire, electric gate with a small boy his age. The friendship results in horrific consequences based on the best of intentions.

The other great movie I had the pleasure of viewing was "The Reader" with Kate Winslet, set in post WWII Europe. Kate's character is an odd, introverted, structured, regimented individual who befriends a teenage boy. The movies touches a plethora of controversial issues, including pedophilia, illiteracy, and war crimes. This film repetitively captures how any decisions and actions, no matter how insignificant at the time made, could have a significant impact in the future.

If you like dramas, I highly recommend both of these films.

My kids are in year round school and are supposed to go to school on Monday. Usually Columbus day they have to go to school and I am OK with that. Same with Presidents day. We have snow makeup school days on Saturdays and I send my kids to school for that. Memorial Day? No way - it is a day to honor our veterans AND a day to spend with family. I have off of work that day and I want to spend it at home with my family.

so my kids will be playing hooky on Monday.

Time to brag a little

After entering the past few years I am thrilled to finally have won a prize from the Happily Homemade giveaway! I was a winner through Midnightsky Fibers. I was the lucky winner of basket number 13 found HERE! I love the concept of this giveaway - a melding of works from indie artisans / crafters / designers / shops.

If you did not win this year there is always next! In the meantime you can visit one of this years sponsors found HERE.

Posted by Unknown at 9:22 PM No comments:

Family Day fun and plans for next weekend.

Just finished working and thought I would stop by and post a bit as most of my recent posts have been for sponsors and partners. Most of my current giveaways are winding down and I am hoping to post a few new ones in the upcoming weeks.

This weekend was my company's family day picnic and the girls LOVED it. Of course we ate a ton of food. I had a veggie plate and while the girls had fried chicken and hush puppies. Because I am trying to do a more veggie centric diet , I passed up on the hot dogs, burgers and Carolina BBQ...... Of course that did not stop me from partaking in sampling the other goodies - fried dough, ice cream, Italian ice roasted corn and cookies. They had a little Candy Shoppe set up where the girls went by and filled up their bags with goodies like sour patch kids, candy apples, colored popcorn, ring pops, jelly bracelets and peanuts.

While we were there, Miss N. and Miss C. kept taking off to play the games and Miss E. hung out with me for a while. She decided she wanted to ride one of the ponies. There were 4 ponies - all adorable as could be but Miss E. decided she HAD to ride the white one because it was the "prettiest". As luck would have it she was the 4th kid in line and the three in front of her all picked other ponies. She was grinning from ear to ear the entire time. That is when I remembered that I forgot my camera again. Out of all the years I have gone I have remembered to bring my camera one whopping time. Pitiful, I know.

Although they had a ton of activities, the big attraction for my little girls was the carnival games We arrived with empty bags and arrived home later with not only candy, but also about 30 new stuffed animals. My oldest daughter played Bingo for a couple of hours and because of the heat, I joined her for the duration.. My friend Jason watched the little ones and his daughter. He has more energy than I do!

The last activity we did was some sort of extreme tug-o-war. Miss N and Miss E were harnessed into this big inflatable trampoline thing. They were having a great time until Miss N. took a face dive. Now of course her face only hit a big air mattress for the most part but you would have thought she hit concrete from the way she was carrying on. After that it was time to go home.

In the 10 years I have been with the company I have only missed 2 picnics - one the year my friend Susan married her husband and the year we went on a family trip to Disney. It is fun to see everyone outside of work and meet everyone's families. I always have a fantastic time at Family Day but I think that this may be the last year the company is sponsoring it. There is usually an art festival in my area going on the same weekend that we always miss because Saturday we are at the Family Day Picnic and on Sunday we are too tired from Saturday to do anything else! So although I may be saddened to see Family Day go away, I can go to the festival next year as an alternative if it is not offered.

Next weekend the pool should open and I know where we will be hanging out. I refuse to go to the beach as it will be a nightmare getting there and back. Looking forward to a 3 day weekend and the beginning of summer. Time for picnic food, longer days and, (because of my vitamin D deficiency), some guilt free sunbathing!

Posted by Unknown at 6:26 PM No comments: 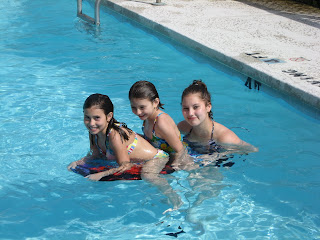