What are ATCs? ATCs are the ABCs for sharing art in your hometown, your state, your country, your world. 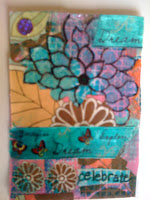 - ATCs are always traded, never paid for. Exceptions to this are ACEOs (ACEO: Art card, editions and originals). These are cards designed by artists as collectible editions, and are sold versus traded
- ATCs can be any medium but are typically the size of a normal trading card.
- ATCs are a fun, unique and practical way to invest in art without spending a fortune. The smaller size is wonderful for a few reasons. It enables artists to try new ideas, mediums, techiques, etc. before moving onto a bigger scale pieces. Because of the smaller size it also is great for children.
We are new to this, but here are some that my daughter's and I created.  Not too shabby for a first run!  Mine is above and below are the ones the girls made - I wish I could figure out how to rotate the photos at the bottom - for now you will just have to turn your head sideways: 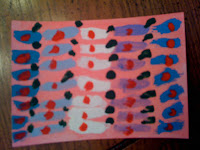 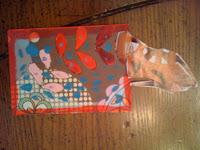 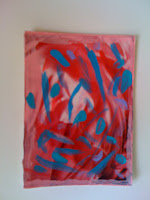 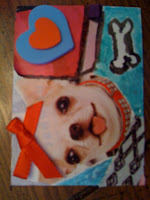 If you are looking for something fun to do yourself, with friends, or with kids, consider an ATC gathering!     You can use any medium including scrapbooking supplies, pencil, paint, markers, clay, metal, ribbon, beads, magazines, old books, recycling materials etc.  The possibilites are truly endless.  You can tell a story through a series of ATCs or simply express yourself differently on each one.
I joined an online forum for ATC trading that I hope to participate in but I am saving our first "batch" for sentimental reasons.

Who went to Baking with Betty? 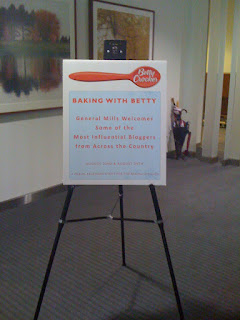 I arrived home from Minneapolis late Tuesday. Wed - Friday I was fairly busy with work and getting the house back in order but I am ready to share all the fun! I do apologize if the quality of the pictures on my website may not be as high as others - most of the other ladies had what I would consider "professional" cameras. I had my iphone....

Tuesday afternoon I arrived in MN and took the super-shuttle over to the hotel. Upon arrival there was a Baking with Betty "reception". Bloggers were able to sign in, meet our PR contact, obtain an agenda and grab lunch. I was presented with a Betty Croker gift bag filled with great baking tools (see picture below)! I was able to meet a few other bloggers then went to my room to check vm, relax and then freshen up. 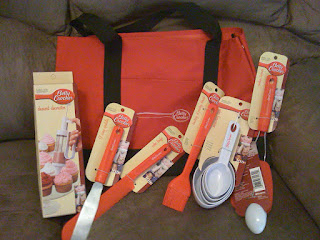 Later that night everyone met in the lobby - there were 30 bloggers total. We had a great, diverse group of women. Most of the bloggers were from the West / Midwest, but there were a few Northeasterners (3) and Southerners (5, including myself). After everyone gathered in the lobby, we boarded a bus to take us to the boat for our dinner cruise.

The dinner cruise was fabulous! The weather was beautiful, the food was great and we learned about the history of area, the beautiful homes on shore and got to learn more about one another in addition to meeting the wonderful people at General Mills.

Upcoming posts on my tour at Betty Crocker will include the following:
- Headed out! Tour of the General Mills Facility
- The History of Betty Crocker and New Products
- Baking in the The Betty Crocker Test Kitchens

Here are the blogs from the other ladies who attended (besides Me!):
A Few Shortcuts
Baking Bites
Fake Ginger
Family Fresh Cooking
From My Kitchen
Frugal Living and Having Fun!
Gourmet Mom on the Go
Hooiser Homemade
I am Baker
Jamie Cooks It Up
Joy's Hope
Latina on a Mission
Mama Latina Tips
Mami of Multiples
Megan's Munchies
Modern Mami
MomSpark
Musings by Jacquelyn
My Big Fat Cuban Family
My Blessed Life
Nika's Culinaria
Real Mom Kitchen
Save at Home Mommy
Taste and Tell
The Snyder 5
True Adventures of a Kitchen Girl
Utah Deal Diva
Your Fun Family
24/7 moms
4tunate


I believe one of the moms could not make it but that SHOULD be everyone. Check out their blogs and lookout for more updates from yours truly :)


Disclosure: General Mills covered the costs of my trip to the Baking with Betty blogger event. For more information on this blog and on my posting practices, please refer to the disclosure policy below.

Tomorrow I head out to Minneapolis for the Baking with Betty event. SO excited. I am not sure how I got chosen... I looked over some of the blogs of other bloggers who are attending. Normally I would say I am a decent baker. I can whip up something tasty if needed. I also make a killer loaf of Pumpkin Bread (ironically the recipe is from my Betty Crocker cookbook). Compared to these ladies however, I feel like a beginner - LOL. Some of them can really, really, REALLY bake.

It should be fun regardless of my baking skill level comparatively. I feel very honored to be invited and am so very appreciative to the fine people at Betty Crocker for sponsoring this. They really rolled out all the stops on this one and the experience is something to really look forward to.

Tomorrow I fly in. Once I arrive I will shuttle over to the hotel, check in, hopefully meet some of the other attendees and then go to my room to relax. Later that evening we will go on a dinner cruise - FUN!!! I have never been on one but from what I have heard I am sure it will be fabulous :) Tuesday is a full day - touring the kitchens, baking and rotating stations (a total of four). We finish mid afternoon. I may try and venture over to the Mall of America for a couple of hours before headed home.

Wednesday is back to work and I have full schedule. I am sure I will be tired but I can catch up on my sleep next weekend.

I hope we are allowed to take pictures. If we are you can be sure that I will be posting them here.

Have a wonderful evening - I will be catching up with you soon.

Beach, Books and Back to School

Quick update! We have been at the beach. A few new giveaways and reviews will be posted over the next few days and giveaway winners will also be drawn, announced and posted.

I hope that everyone is enjoying the summer. Can you believe it is August already? Ryan, the girls and I have enjoyed our stay at Carolina Beach. Yesterday we went to Southport and had a fun day overall. We took the Ferry over in the early afternoon. Upon arriving, we immediately found the visitors center. Afterward we primarily strolled through the streets, visiting random gift shops and antique stores. We took a break at the Christmas Store - outside was a lovely gazebo where we each enjoyed a HUGE dish of ice cream. We each had 2 scoops but to be honest, it was more like 4 scoops. If I had know their servings were so large I would have ordered one scoop! Afterward we went to the Candy Shop which was actually the back of the Christmas Store.

We left Southport with a few souvenirs, a bag of old fashioned candy and the realization that we missed the Ferry. The next Ferry was not scheduled to depart until over an hour later so we took the long way around back to Wilmington. The drive was a little over an hour. On the way back to the condo, we stopped at Goodwill. I picked up 4 books - 2 for me and 2 for the girls.

I finished reading Her Fearful Symmetry by Audrey Niffenegger which I had looked forward to reading for quite some time - it has sat on my dresser for about a year. I LOVED The Time Traveler's Wife - it is essentially my favorite novel. I think I was afraid that I would compare anything else she wrote up to that; a standard that is so high it would be impossible to attain. I actually found that although, yes, there was no chance that it would become my new favorite novel, Her Fearful Symmetry was a book that held it's own. I was not tempted to compare.

The storyline was very different from The Time Traveler's Wife; Her Fearful Symmetry was darker, more intriguing, mysterious and old fashioned; I would even go as far as to categorize it as modern gothic fiction. I am not sure if there IS such a thing as modern gothic fiction but I find that categorization appropriate considering the overlying themes yet being set in present time. I did guess at the ending, but possibly because I had read Stranger with My Face. I won't say anything more than that to avoid the inevitable "spoiler" otherwise.

Ironically Stranger with My Face was made into a Lifetime movie and aired in 2009. The synopsis I read indicates that the script deviated quite a bit from the book, a huge pet peeve, so I am not sure if I will watch it. I am actually surprised that this book gained enough interest to actually make a movie. (Not that the book wasn't good - as a teen I loved it; I was just not aware of anyone else that read it).

While at the beach I also read The Hiding Place (one of my Goodwill finds). I lucked out with this purchase as it was on my amazon.com wish list. I did enjoy Corrie Ten Boom's story - it was very descriptive and carried a positive tone throughout the book. At times I found that it was TOO positive and the religious overtones were a bit too heavy for my taste. Despite that I did enjoy this real life story of a WWII victim, survivor and hero, marveling at her bravery, tenacity, humble nature and self-sacrificing ways.

I am also still reading The Girl Who Played with Fire, The Goodness of Fried Okra (Kindle) and The Help. I still wish to tackle War and Peace but may read Pillars of the Earth first. I would like to read it before the movie comes out. If I see the movie first, I will have no desire to read the book afterward. I hate knowing the ending so rarely read the book if I have seen the film first.

Thursday we go to Miss C.'s High School orientation. I cannot believe I have a child entering high school. Where does the time go? Of course I am worried for various reasons, but I am also excited for her and hope that this new chapter in her life is a promising one.

Monday it is back to work for me. The girls will still be tracked out for another two weeks but will resume school after that. Miss C. will start around the same time. It will be interesting to see how having two children on a year round schedule and one on a traditional schedule works out.