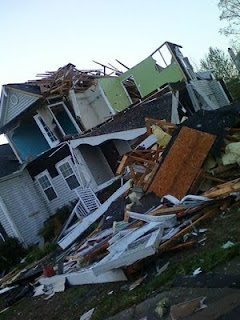 I had planned to do a few product reviews and post a couple of giveaways this weekend - I was targeting Sunday to catch up. Friday I worked until very late and Saturday I had an all day Girl Scout event an hour outside of town. Although we were aware of storms on Saturday, the events went on as planned and regarding the anticipated weather, we played it by ear. Saturday afternoon the expected storm front hit Raleigh and was headed our way. Some of the parents headed back to Wake Forest / Raleigh early. For those of us who stayed behind, we waited with the girls for the same storm front as we were on the same path. Before, during and after the storm we had intermittent contact with home or none at all.

Our troop sought shelter with another troop. About 25 girls and a few adults were in a cinder block room. As sirens rang, we remained bunkered down. Half of the girls were crying, frightened because we could not reach home and frightened of the storm headed our way. Ultimately we did experience rain but were fortunate that we did not get anything worse. 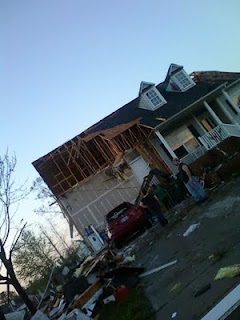 During the time we took shelter I tried repetitively to get in touch with my husband and daughter. I received a couple of texts from my daughter stating that she was OK. The last text I received from my husband said "tornadoes everywhere" and then I did not hear anything for close to an hour. I was certain something happened to him because he always responds to texts right away. Even though I was trying to remain calm for the girls, I was very frightened and became more and more agitated as more time passed. I finally did receive a text from him with just a picture of a home flattened and another home next to it standing, but missing a good portion of the siding.

When I received the text I was immediately relieved my husband was Ok but very upset because I thought the collapsed home was our neighbors and the other home standing, ours. The house was the same color and the frame looked identical. I tried texting my husband to get some context around the picture but it was very difficult to successfully make phone calls or receive text messages. (One of the other moms showed me how to make the picture bigger and I discovered once magnified that it was NOT our home by the type of window).

When I finally did speak to my husband he informed me that our home was fine but that the one street that both crosses and runs parallel to ours was hit. The section that crosses ours is about 6 houses down and this is the section that I initially thought he was referring to. The 2nd time I talked to him he said it looked "like Kansas". At this point I decided to go home and ultimately decided to let my younger daughters stay overnight at camp. I planned to pick up my oldest daughter upon arriving in town before heading home. 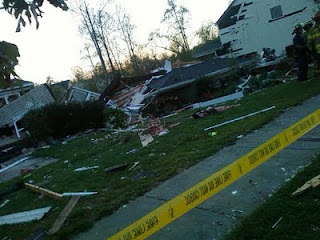 When I first arrived in Raleigh, I noticed quite a bit of debris littering the roads. I had to go on the beltline to pick up my daughter and as I passed the general area we lived, I noticed signs and trees down as well as more debris. As soon as I picked her up we headed back home. When we arrived into our subdivision I was shocked at the general conditions. Trees were down everywhere and many people were walking around looking shell shocked.

We arrived home and my husband was standing outside. He told me to check out the impacted area, explaining that it was the section of the road, after the curve, that ran parallel to ours, . This is much closer - literally right behind the homes directly across the street. As soon as I saw the damage I burst out in tears. This section of our neighborhood was totally destroyed. There were several homes in which half of the home was left, trees were bent and broken and cars were crushed under piles of siding, wood, insulation, and tree branches. One home even had the sod ripped off the ground. Other homes were simply gone, totally collapsed. Every single home sustained considerable damage. Miraculously we later found out that everyone survived - the fact that it is spring break was a huge blessing as many families were not home.

We were surprised to get electricity very early Sunday morning. Once it was a reasonable hour, I headed out on foot to walk down the block and inspect the damage up close and see what I could do to help. The police came and blocked off the road because many people were coming by to walk or drive over, look and take pictures. The officers were not letting anyone through except for the homeowners so they recover what little bit they had left that was salvageable in peace and with privacy. We were not able to help as much as we hoped so my husband dropped off some water and few other neighbors contacted local pizza shops and were able to get donations.

We did leave at one point on Sunday to get groceries. A friend had told me she heard our old neighborhood had gotten hit so I drove over to make sure that our old neighbors were OK. It was very strange going back because it was a similar scene. The street we had lived in looked fine, but the main road in the subdivision had many damaged homes. All that was left of one house was a concrete slab.

For the latter part of the day on Saturday and all day Sunday I felt very disconnected from what was going on outside the neighborhood - we had very limited access to information. I had intermittent access to facebook through my phone, but was not able to pull up the news until late Sunday. We did not have cable or Internet back until late yesterday. I normally work from home on Mondays but because we had no Internet service, I went into the office where I was able to get information on other areas that were hit, the extent of damage in our area and recovery plans. Our neighborhood was featured a few different times on different channels / websites as being one of the hardest hit. I found out that another co-worker who lives on the opposite side of the triangle area also experienced considerable damage.

Over the last 3 nights neighbors have prepared food for victims, volunteers, the police officers and neighbors. Many of the neighbors are pitching in. My mother-in-law donated money to cover food costs which stretched over 2 days. This has definitely brought the neighborhood closer together. 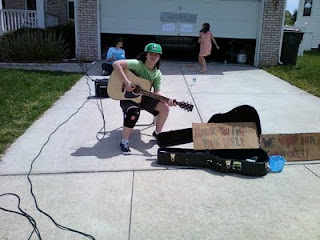 On Monday the elementary school, which also sustained damage, was closed. During the day my teen (who is on spring break), my two younger daughters and a few friends sang for donations and raised $50 for the cause. Also, outside of the taped off section, my oldest daughter swept and bagged trash and debris and also helped the victims recover items in wooded areas. Most of the homes on the cross road were coated in grass or chunks of insulation.

Today I drove to the adjoining neighborhood across from the school, which I had heard sustained even more damage. It was like seeing it again for the first time and I experienced the same emotions all over again - the destruction is unbelievable. Some homes were blown right off of the foundation. Many were collapsed in a heap of wood. There was the now all too familiar sight of blue tarp.


After viewing the other impacted areas and the size of the path I realized that our home was literally right outside the edge of the tornado's path. If the tornado had moved a hair to the left I would be sharing a very different story. We sustained very minor damage to our roof and fence and feel incredibly fortunate. I'll come back with pictures and updates within the next week.

Oh, Marybeth!! I am so sorry to hear about your neighborhood's tornado. I can't even imagine what you're going through right now.

I had stopped by during the UBP 11 and decided to give you an award! I hope it cheers you up and gives you some hope during these tough times. Hang in there!!